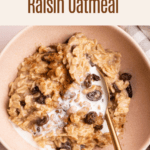 Wholesome old-fashioned oats are cooked with maple syrup, raisins, cinnamon and a splash of cream to make for a hearty, warm, and filling breakfast. This Cinnamon Raisin Oatmeal can be made in well under 10 minutes and can even be made ahead of time to make for a quick homemade start to your day.

Think making oatmeal in the middle of a busy morning takes too much work? Hardly! It's a 10 minute (at most) task that will satisfy the whole family. It's especially good on cold winter mornings, as it really warms the body up from the inside out.

This Cinnamon Raisin Oatmeal is made using old-fashioned oats, subtly sweetened with maple syrup, and has that really homey flavor thanks to the cinnamon and raisins. Want to know the best part? It heats up really well, so if you wanted to make a big batch at the beginning of the week, you can have it on the table even quicker than the little time it takes to make it fresh.

So let's get to making it! The text below offers some tips for making it, or you can scroll down to the bottom for the complete recipe.

Here is a brief overview of the ingredients needed for this recipe. The full recipe with quantities is listed below this text in the recipe card. If substitutions are available for this recipe, they'll be listed here. If you don't see a substitution you are looking for, feel free to leave a comment below.

Oatmeal made on the stove is a staple in our home because it's really fast, nutritious and it reheats well. In the winter months, I'll make it 1-2 times a week, and reheat leftovers for the next few days. And this simple cinnamon raisin version has become a huge hit with my family.

There really isn't much you need to know to make it except two things I want to point out in the directions below.

The first is that the raisins are cooked in the water prior to adding the oats. This is to help plump up the raisins, and this step shouldn't be skipped.

The second is to watch your temperature when you are cooking the oats. The directions call for the heat to be turned down to medium-low. This helps ensure the oats are cooked slowly so they are creamy, and so that they don't burn on the bottom.

And finally, don't walk away from the oats for too long when you are cooking them. You'll need to stir them a few times while they're cooking. They truly only take a couple of minutes.

Place leftover oatmeal in a container and let it cool completely before placing the cover on (this is a universal tip with all leftovers, by the way). Store in the refrigerator for about three days.

To reheat, place in a medium pot and add in a splash of milk or water. Reheat on medium-low until the oats are warmed through and creamy.

Watch It: How to Make Cinnamon Raisin Oatmeal

Making the recipe? Be sure to leave a comment with a star review on your experience! Have a question? Leave a comment below and I’ll get back to you as quickly as I can!

Wholesome old-fashioned oats are cooked up with maple syrup, raisins, cinnamon and a splash of cream to make for a hearty warm breakfast. This Cinnamon Raisin Oatmeal can be made in well under 10 minutes and can even be made ahead of time to make for a quick homemade start to your day.

You can use quick oats if you want, but the texture will be slightly different and you won't need to cook the oats for as long.

I'm Kelli, the creator of Everyday Family Eats, this space where I share easy and quick recipes the whole family will love! I'm a former professional cook and baker, and full-time working mom, who is passionate about creating approachable dinner ideas that allow the whole family to gather at the table and enjoy a meal together.

Keep in the know!

Sign up for the Everyday Family Eats Newsletter to be the first to hear about new recipes and seasonal content you don't want to miss.